I'd wanted to pick up some things for our Diwali trip home the day before we were travelling. Fresh Bhooth Jholakiya, Gondhoraj lemons and the like. Unfortunately, just as I left home I got caught in the sudden, unexpected rains that seized the city of Guwahati for an hour. Even after the rain stopped the flooding did not recede until next morning. Ganeshguri and Zoo road had waist deep water in places. Here are some of the pictures that I took, when I was stuck for 3 hours in barely moving traffic. 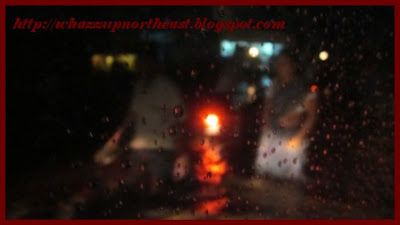 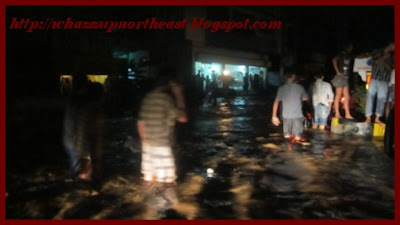 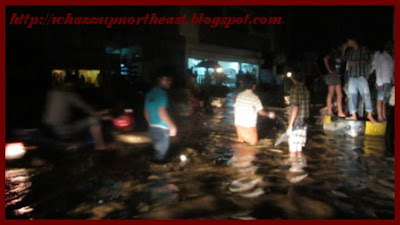 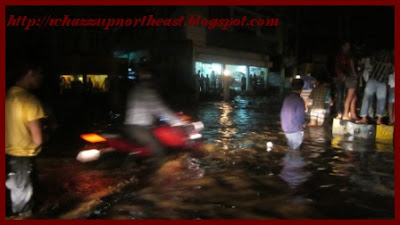 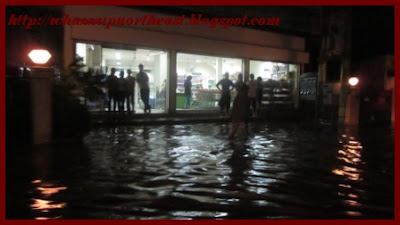 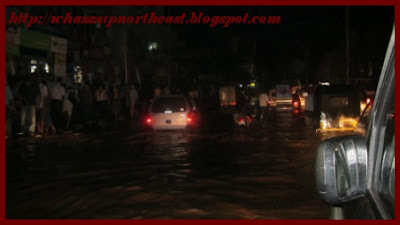 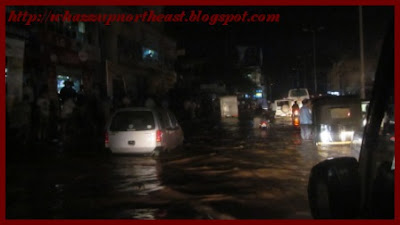 Yesterday evening saw 2 musical programmes being scheduled in Guwahati. We decided to head to the Pankaj Udhas concert over the Coke Music Studio with Leslie Lewis, as we thought it would be a slow mellow evening listening to the mesmerising voice of Pankaj Udhas. 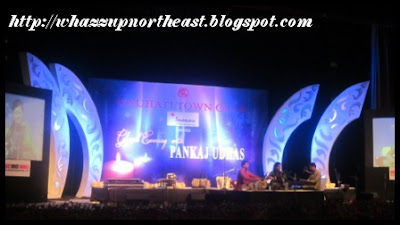 Boy! Were we mistaken!

Although, this had nothing to do with the performance itself. The invitation said 6:30pm, but introductory speeches started only at 7:00pm. The opening performance by Sunita Khound started only at 7:15pm, but it was fantastic and worth the wait. She is a gifted violin player and a wonderful vocalist. She played everything from ragas to item numbers on the violin. 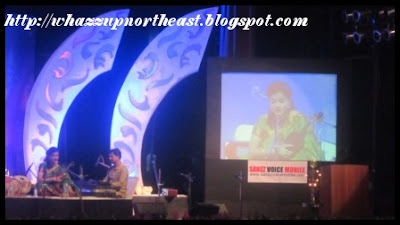 Unfortunately, for her entire performance the lights were left on and the audience behaved as though they were at the GMC auditorium for a wedding and Sunita was just some background music. People were walking up and down the isles having loud conversations with one another, mobile phones wouldn't stop ringing and people just continued to pick up their calls and talk on the phones as though they were in their own homes. 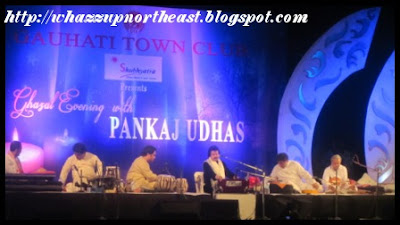 However, by the time Pankaj Udhas was felicitated and ready to start performing around 8:15pm, the lights in the audience section were thankfully turned off and we hoped that the audience would settle down. Some of them did, but not all. People were strolling in at 9pm and then the simultaneous strolling out began too. Then there was a section of the crowd which went outside the auditorium to pick up snacks and inspite of all the notices saying "no food inside the auditorium please", they went right ahead and brought it all inside anyway.

So now added to the long "hello, how are you? good to see you" interactions with those coming in and the "good concert no? bye, see you tomorrow for lunch" interactions with those leaving and the mobile phones ringing and the one sided conversations on the phones, was added the tearing open of snack bags and the popping open of 500ml aerated drinks.

Annoyed looks at people around us loudly engaged on their mobile phones made absolutely no difference to them except perhaps to raise their decibel levels!.

With mobile phones these days everyone fancies themselves a photographer. I completely understand people taking pictures, and if the event permits it, I see no problem with that. BUT, at any event where the lights are dimmed over the audience, you DO NOT USE YOUR FLASH! Its irritating for anyone trying to enjoy the performance and for the performers themselves. Even the professional/newspaper photographers were guilty of using their blinding flash.

Pankaj Udhas said that he had been repeatedly coming back to Guwahati since 1983. Honestly, I can't think why. The audience was downright disrespectful and rude in their behavior. Hopefully he couldn't see and hear it on the stage, except perhaps when ALL the lights were turned on, so the CM could make an exit midway through the performance.

Repeated requests were made to the audience to not record Pankaj Udhas' performance. He himself made the request as it would contravene copyright issues and make things difficult for him. The ushers from Jettwings themselves were busy recording the performance, how could they have intervened to stop the rest of the audience that was doing so?

I thought that Delhi audiences were badly behaved when it came to live shows, Guwahati can be proud, they overtake the national capital in this one respect at least.

I was really shocked with this behavior. In general the average Assamese is polite and considerate except perhaps when on the road, behind a wheel and the occasional exception in the movie theatre. What I saw yesterday, defies all logic.

There is a general etiquette to be followed at any live show. Foremeost of which is:
RESPECT THE PERFORMER.

When it comes to a sit-down live show, then there are some basic guidelines to be followed.
1. Maintain silence as far as possible. The occasional turning to the person immediately next to you to ask "which raaga is this?" or "which movie is this from?" or "wasn't that a lovely movement by the tabla player" is fine. But it should only be audible to the 2 of you and not the person in front of you or to the other side of you.
2. Mobile phones HAVE to be turned off or on silent mode. Leave your phone on silent. You can always check messages and missed calls unobtrusively - in a way that the light from your screen does not disturb the people around you. If there is an emergency then quietly leave the auitorium and return the call outside. Do not start talking as you are walking, that is bad behavior too. And instructing the maid that Baba should eat 3 chapatis not 2 is NOT an emergency!
3. Do not bring toddlers to such events. If a child does not understand and obey "sit quietly", then they cannot be brought to such events. Wailing babies are definitely a no-no. Older children who you are trying to inculcate with a sense of culture and music is fine, if they understand "stay quiet" and if one of the adults in your group is willing to leave the auditorium once the child is restless or needs to go to a washroom.
4. No pictures, no flash. If the event allows you to take pictures, then go ahead and do so. If they request you not to, then don't. In darkened rooms, do not ever use your flash, it is blinding for others.
5. No food. Unless its supper theatre or a sit down dinner performance, its never ok to bring food into a performance hall. Some locations allow drinks to be carried inside and some do not. If the floor is carpeted, its not a good idea to dump your leftover garbage under your seat or the seat in front of you.

Respect and courtesy are the cornerstones of any community. Unless these 2 traits improve out here, I think we'd rather listen to Pankaj Udhas on our music system at home, than at a live concert as long as we live in Guwahati. At least we won't have to put up with the boorish behavior of people around us.
Posted by Kim at 4:06 AM No comments:

The ISKCON (Lord Krishna is the main deity at all ISKCON temples) temple is located within the city, off Ashram Road and on Sarania Hills. 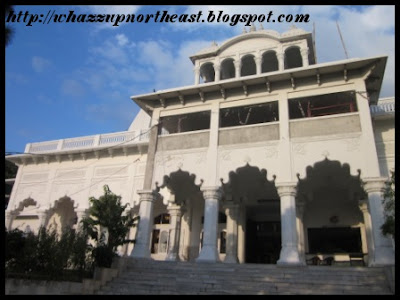 This is the smallest and simplest ISKCON temple I have ever been to. The walls are plain, no works of bas relief or paintings are up on them yet. 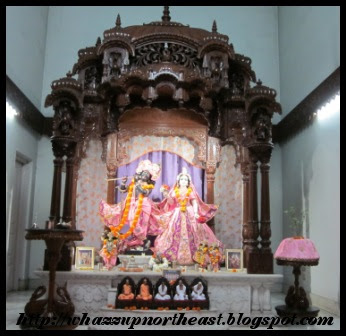 The only focal point are the single set of idols of Krishna & Subhadra. This is also one of the rare temples where Subhadra is depicted as the consort of Krishna (at the main idol)- an honour normally reserved for Radha. 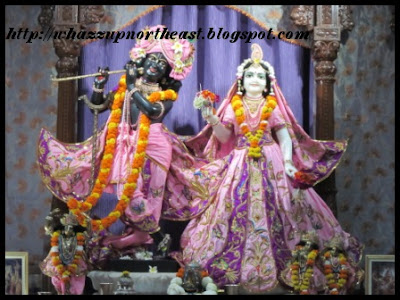 The temple is located on top of a hill, so most days, its very quiet. Its not a tourist attraction, so there are very few people around and that just enhances the feeling of peace in this location. The view from the platform behind the temple is lovely, because you realise that you are quite in the center of the city, while at the same time above it all (both literally & figuratively) 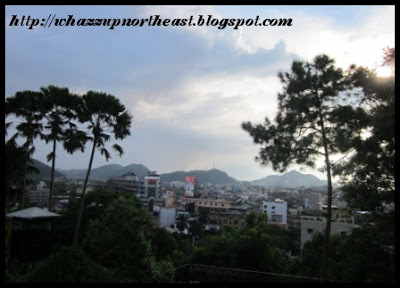 The Tirupati Balaji Temple in Guwahati was inaugurated as recently as 1998, near ISBT on NH 37 and just before Maniram Dewan Trade Centre. 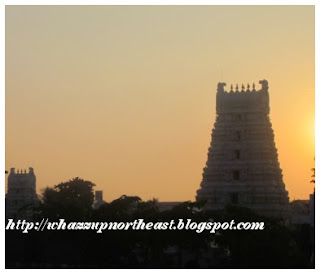 The temple is built in the style of the original Balaji temple at Tirupati. The first temple at the gate is dedicated to Lord Ganesh, the remover of all obstacles. Further down the path is the trio of the main temple complex with Lord Balaji ine the center, Goddess Padmavati (avatar of Lakshmi) to his right and Goddess Durga (Ashtabhuja -Shanti Durga avataar) to his left. There is a smaller temple for Garuda facing Lord Balaji. 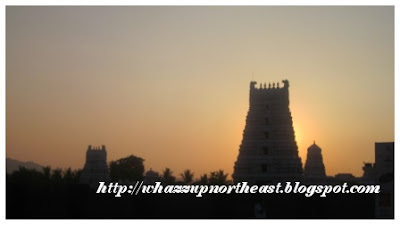 The queues are of course miniscule compared to Tirupati. Today there was a lovely prasad of  chhole tempered with mustard seeds and split urad dhal. So simple, yet so tasty. The famous Tirupati laddu prasad can be bought for 20rs a laddu. 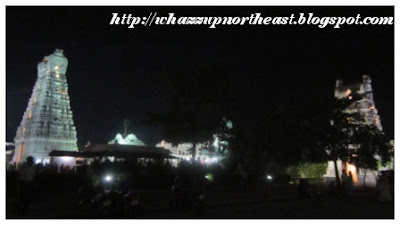 Various artis and sevas are possible. Starting with the Archana for 50Rs which also includes a laddu and allows entry further into the garbha griha. The temple conducts mundans (151Rs), vehicle puja (150Rs) and even marriages (2500Rs). 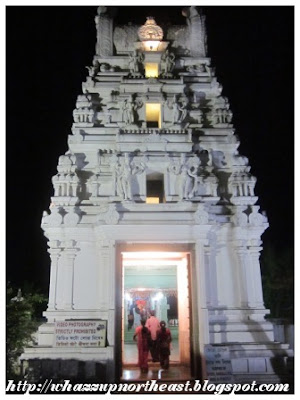 The temple complex has sprawling lawns and is a green lung on the outskirts of the city, so there were plenty of families relaxing in the gardens. 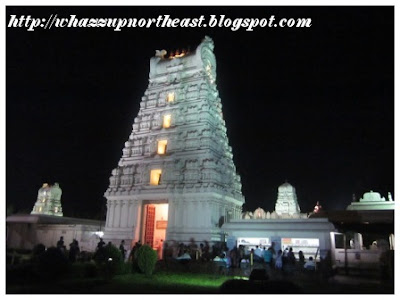 Its a lovely place for an evening visit. The environs are very peaceful and soothing. The green cover makes it much cooler than the road just outside the gate.

This is not one of the historic temples around Guwahati, but you could include it in your itinerary.
Posted by Kim at 5:57 AM No comments:

Hopped/Drove over to Maniram Dewan Trade Center today for the ongoing North East India Trade Expo that started on the 29th of September. 9th October is supposed to be the last day, but some banners at the location advertised that the expo would be on until the 13th of October. 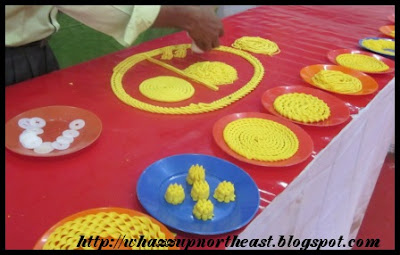 Since it was supposed to be a North East India Trade Expo, I was hoping to pick up some local handicrafts and silks and also finish my Diwali and Christmas shopping. Unfortunately, in that respect, it turned out to be a disappointment. There were a few stalls seeling Assam silk saris, but the range that I've seen at Pragjyotika, Jagaran and Purbashree is so much superior and at much better value. There was ONE stall of Cane furniture and 1 or 2 with cane baskets out of a total of around 60 stalls. 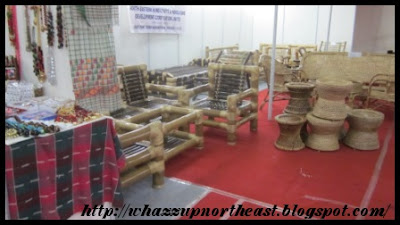 Other than that, it was a lot of Home Shopping network products - treadmills, stain removers, roti makers etc. Cheap Chinese plastic toys, slippers from Delhi and Mumbai, synthetic carpets, Kashmiri wooden decorative pieces and stuff like that. There were quite a few jewellery stalls claiming that they were selling authentic precious stones, but I don't know who would buy precious stone jewellery from a short term exhibition. 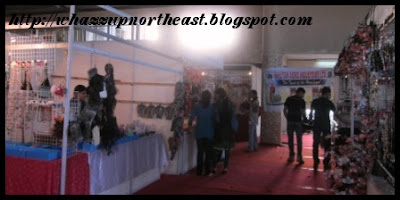 The only stalls I did spend some time in were the Thai and Kenyan stalls and the pickle stalls and I did come away with a few pickles. 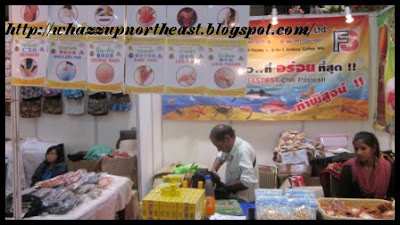 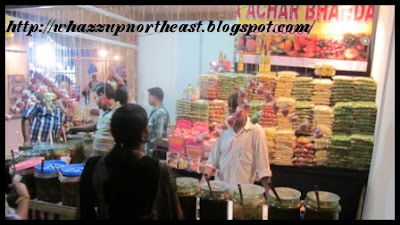 However the only reason that I felt the drive was worthwhile, was my visit to the Tirupati Balaji Temple next door.
Posted by Kim at 8:09 PM No comments:

This work is licensed under a Creative Commons Attribution-NonCommercial-NoDerivs 3.0 United States License.

Books about the North East

Where to Eat? Assam

Where to Eat? Tripura